OIC Delegation visits Philippines, elated over the developments of the Bangsamoro peace process

MANILA, January 31, 2020 – Representatives of the influential Organization of Islamic Cooperation (OIC) ended their three-day visit Wednesday in the county, particularly in Mindanao, on a high note, following series of successful meetings with the Philippine government, the Bangsamoro Autonomous Region in Muslim Mindanao as well as with the leaders of the Moro National Liberation Front (MNLF), and the Moro Islamic Liberation Front (MNLF).

The delegation was led by El Habib Bourane, OIC’s Director for Muslim Minorities under the Department of Political Affairs; Datuk Ibrahim Abdullah, Special Envoy of the OIC Secretary General for Peace Process in Southern Philippines; and Dr. Hassan Abedin, Adviser and former director of the Muslim Minorities.

Their visit was aimed to facilitate the possible high-level visit of the OIC Secretary General Yousef bin Ahmad Al-Othaimeen in the country sometime this year.

The OIC has been playing a key role in assisting the Government and the different Moro fronts since 1970s to find common ground to resolve the Bangsamoro armed struggle in Mindanao. 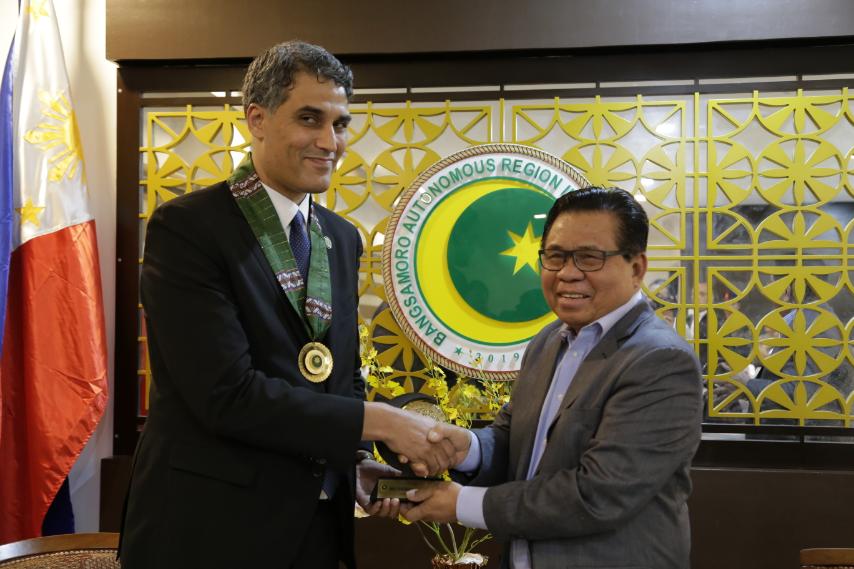 The meeting provided the OIC delegation of the current efforts of the Duterte administration in implementing all the signed peace agreements between the government and the two Moro fronts.

Several milestones have been achieved in the Bangsamoro peace process under Duterte administration. In 2019, President Rodrigo Duterte led the campaign for the successful ratification of the Bangsamoro Organic Law (BOL), which created the Bangsamoro Autonomous Region in Mindanao (BARMM). The new parliamentary-form region enjoys greater fiscal autonomy, and justice system to name a few, which truly reflect the aspirations of the Moro people for a genuine autonomy.

The Duterte administration also up the ante in re-engaging the leaderships of the MNLF through the series of meetings between the leaders of the front and the President which culminated to the establishment of coordinating committees to engage the MNLF groups.

Recently, President Duterte signed the appointment paper of Misuari as the Special Envoy of the President to the OIC in a bid to sustain the gains of GPH-MNLF peace process. 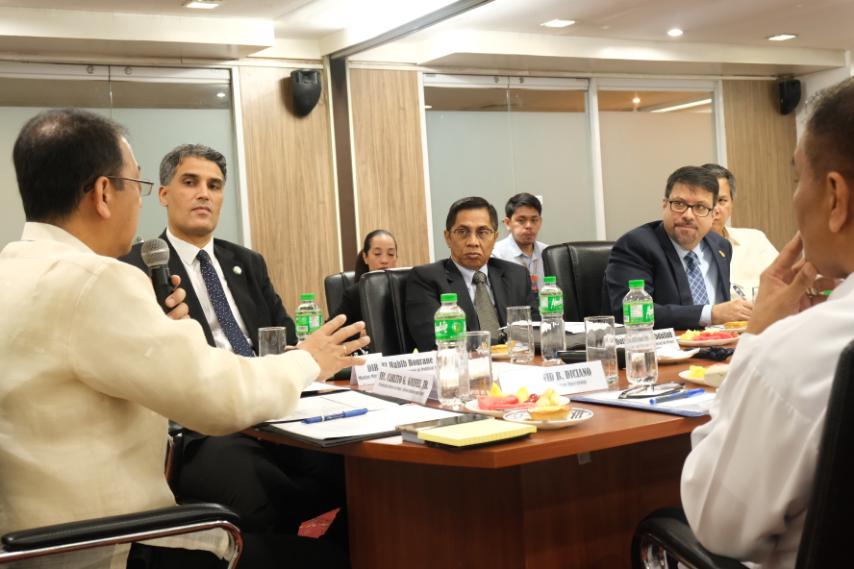 The leaderships of the MNLF Founding Chairman Nur Misuari and Yusop Jikiri uphold the role of the OIC as a mediator of the Bangsamoro peace process.

Based on the results of the TRP, two commitments have yet to be complied with on the side of the Philippine government.

These include the establishment of the Bangsamoro Development Assistance Fund (BDAF) and the creation of the Tripartite Implementation Monitoring Committee (TIMC). 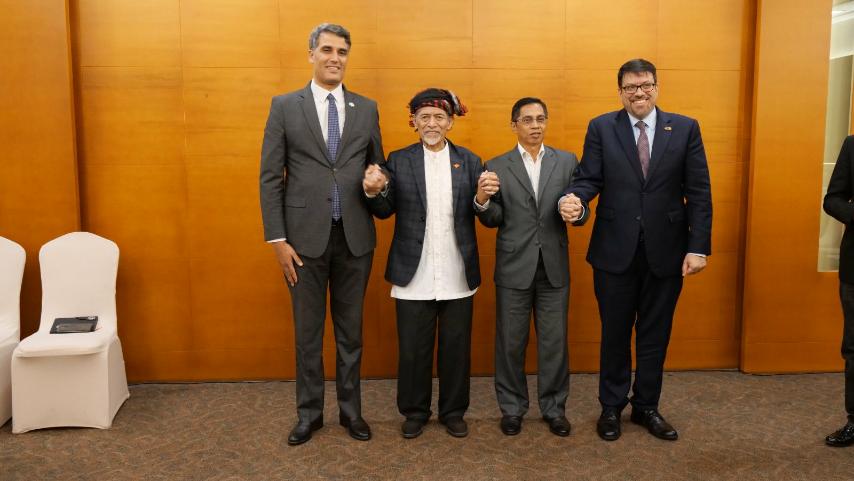 Milestones in the Bangsamoro peace process

As representative of the OIC, Mr. Bourane expressed his gratitude to the Philippine government and the Moro fronts for their successful visit, and for giving the OIC a comprehensive understanding of the Bangsamoro context.

“We are not outsiders to the issues of the southern Philippines.  We are your partner and you can rely on us. When we go back, we will brief the OIC Secretary General, who is eager to visit the Philippines,” Bourane said.

He said the establishment of the BARMM is a very positive step forward in the peace process, and instrumental in achieving peace and security in the Southern Philippines.

“President Duterte has taken a huge significant step and the OIC has recognized that,” Abedin, who worked with three OIC secretary generals in the past, said.

Abedin said he was elated “to finally see a fully functioning Cabinet [of the BARMM, which] is like a dream come true. The dream of the Bangsamoro has been finally realized. There are many Muslim communities suffering around the world and here in the Philippines, you find communities living in harmony with each other where indigenous peoples, women, youth, and others are participating together.”

Abdullah for his part expressed the OIC’s continued commitment in providing support to the Bangsamoro people. He also emphasized that the welfare of all constituents, Bangsamoro people — Muslim and non-Muslims alike, within or outside the territorial jurisdictions of the BARMM — shall be taken into consideration to ensure inclusivity and sustainable peace in the region.

“As everybody is fully aware, the commitment now of the OIC is realizing the objectives in the region especially in the Bangsamoro. We wish to congratulate each and every one for the milestones, the establishment of the BARMM, and the passing of the Bangsamoro Organic Law,” he said.

Former Executive Secretary and now adviser to the GPH coordinating committee, Eduardo Ermita said the BARMM needs a collective support both from domestic and international arena.

Ermita, who is also a former Presidential Peace Adviser, said the implementation of the BOL “would depend heavily on the effective and dedicated political leadership, and sustainable economic assistance that the national government can extend to the BARMM, as well as assistance that can be generated from other sources both domestic and from outside countries with a common cause with our Filipino Muslim community.”

“We are hopeful and optimistic that our continuing engagement and good relations with the OIC countries would result to the successful attainment of the lofty objectives that are embodied in the organic law for the Bangsamoro Autonomous Region in Muslim Mindanao,” he told the OIC officials.

For his part, Galvez said the OIC has been a “big brother to the Philippines, especially during the most crucial stages of its peace journey. For this, we shall forever be grateful.”

He said the President gave him the marching order to implement the remaining commitments of the TRP.

“The Philippine government through the guidance of President Rodrigo Roa Duterte, we are committed to bring substantial results within the first quarter of this year to implement the remaining commitments, particularly the establishments of the BDAF and TIMC,” he said.

Galvez said the government is commending the efforts of the OIC to harmonize the Moro fronts in Mindanao.

“The harmonization will help us in the implementation of all the signed Bangsamoro peace agreements,” he said.

He noted as what President Duterte has emphasized, “the BARMM and the BOL will benefit everyone, regardless of tribe, religion or political ideologies.”

“Through the Bangsamoro Coordinating Forum (BCF) and other peacebuilding avenues and mechanisms, we are hopeful to bring the two Moro fronts together, based on the principles of mutual trust, cooperation and most of all, respect,” he said.

“It is our hope that the OIC will continue to support the Philippine government in its quest to achieve long-lasting peace and sustainable development for the Bangsamoro people,” Galvez said.###