MOHAMMAD AJUL, BASILAN (October 4, 2019) – More than 500 children in this coastal community were treated to a memorable, fun-filled day, which to them was a welcome respite from living in an area that has been wracked by armed conflict for decades.

And for the first time, the children did not run away and seek refuge in their homes when they saw several Huey helicopters hovering over their town.

Over the years, this town has been the site of major clashes between government forces and non-state armed groups, including followers of extremist organizations which have been responsible for some of the most violent attacks in Mindanao.

“The armed conflict here was so intense that children, as well as the adults, [are afraid upon hearing] the sound of [a] helicopter,” recalled Dr. Arlyn Jawad Jumao-as, president of Save the Children of War (Basilan) Association, Inc., which spearheaded the Festival of Love and Peace.

Over the years, the Basilan-based non-government organization has been providing social healing interventions to child victims of war in the island-province.

“It literally rained with assorted candies and stuffed toys. Now, children will no longer fear the sound of a helicopter,” Jumao-as said, as she watched the children scramble to catch the goodies.

According to the veteran development worker, the Save the Children of War Association’s  interventions are designed to help the children recover from a dark chapter in their town’s history, and give them back the childhood they lost during the war.

“And all they need is a little childhood, a little help, and a little encouragement,” Jumao-as said.

For this year’s social intervention, she invited Presidential Peace Adviser Carlito G. Galvez Jr. to share his experiences and inspire the children of this battle-scarred community.

“It is not only the physical needs of our children that we need to provide for such as food, clothing and shelter; more importantly, we need to attend to the development of their mental, emotional and spiritual health as well,” Galvez told the participants of the festival, who included local government officials and various sectoral representatives.

Mohammad Ajul Mayor Ibrahim Ballaho noted the event “is a symbol that our town is gradually achieving peace.”

“The fate of our country lies in the hands of our children,” Ballaho said.

Themed “Nurturing the Missing Piece of Peace,” the day-long peace festival was organized by the Save the Children of War (Basilan) Association, Inc. in partnership with the Municipal Government of Hadji Mohammad Ajul, 4th Special Forces Battalion, and the Office of the Presidential Adviser on the Peace Process.

The activity is the culmination of the healing process for 547 psychologically pre-assessed children of war coming from the different barangays of Hadji Mohammad Adjul.

Jumao-as explained the long-term goal of the program is to ensure that the youth, particularly those who lost their parents during armed conflicts, will not be susceptible to radicalization and violent extremism.

“On its 5th year, the festival aims to boost the morale of the (ASG) surrenderees, and encourage current members of the ASG to also return to the folds of the law,” she said.

During the event, several children “surrendered” their toy guns to officials of the province. In exchange, they were given tokens such as school supplies and bikes.

The bikes, according to Galvez will provide the children the “experience of early adventures and freedom to explore their limits and endurance.”

“Bicycle may also represents ‘early freedom’ to travel distance freely away from their own backyard,” he noted.

Among the highlights of the activity was a dance number performed by former members of the Abu Sayyaf and their families. The performance was a testament to their transformation into peaceful members of society.

“The welfare and protection of our children are assured,” Basilan Governor Jim Hataman-Saliman, said, as he thanked everyone who contributed in making his town a safer and happier place to live in.

The governor also expressed his gratitude to the different private organizations and government agencies that continue to help in the healing and reconciliation process in Basilan.

He said the provincial government has been implementing several programs to help former rebels and members of the Abu Sayyaf to transform their lives. These programs are being replicated in areas that has a similar problem with violent extremism, particularly in Lanao del Sur.

Brigadier General Peter Suchianco, who helped look for donors for the school supplies for the children here, urged the residents to collectively work for peace in their area.

“Peace is only brought about by those who want it, who worked for it, and I am very happy to see that all of you have worked for it,” he said.

He also encouraged the people here to take advantage of their natural resources as a way to help develop their areas and provide the needed economic opportunities for the residents. 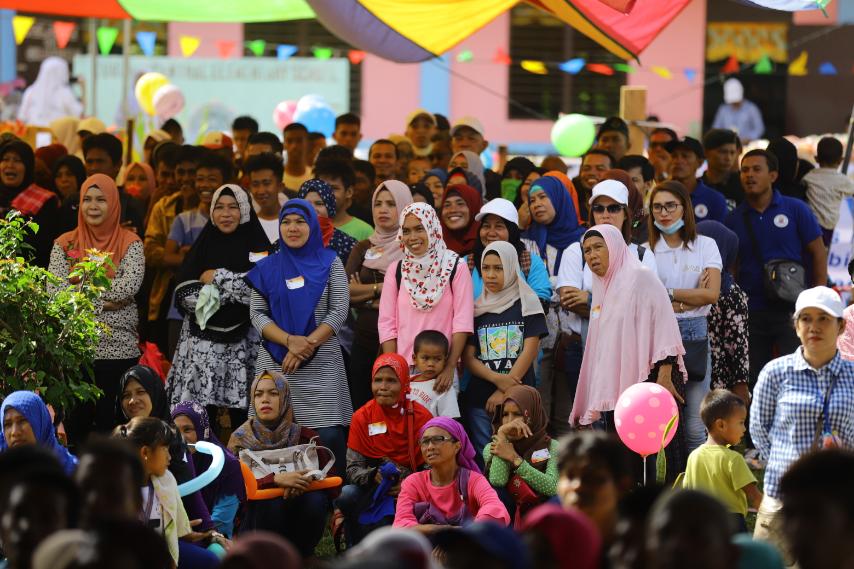 “If we have maintain the peace and order here, I’m very sure people from Luzon will definitely visit your place and this will bolster the development of your town,” he said in mixed English and Filipino.

“Your place is very beautiful for tourism. We have to take advantage of what God-given treasures that you have, which is the environment and the people that you have. These are the resources that you can further develop for progress,” he said.###