MALOLOS CITY, BULACAN (09 OCTOBER 2019) — At least 12 members of the New People’s Army (NPA) in Central Luzon have surrendered to authorities on Wednesday after being heavily exploited by the communist group.

The returnees were given immediate cash assistance and other forms of aid during the special meeting of the Regional Task Force to End Local Communist Armed Conflict (RTF-ELCAC), which was presided by Presidential Peace Adviser Carlito G. Galvez Jr., the Cabinet Officer for Regional Development and Security (CORDS) for Region 3.

“Walang pakialam ang mga komunista sa mga batang katulad nito, pero kami sa gobyerno, pinangangalagaan namin pati mga bata. (The communists have no regard for the young ones like this baby, but we in the government, we protect them, including the children.),” Galvez said, referring to one of the returnees, an 18-year-old girl who had a two-month-old child in tow.

Concerned government agencies will be conducting further assessments to determine the interventions to be provided to the former rebels.

The six firearms and other weapons turned over by the returnees were presented to the media earlier in the day.

Galvez also encouraged the returnees to convince their comrades who are still in the mountains to return to the folds of the law.

“Magbalik-loob na sila. Wag na silang maniwala sa mga komunista kasi puro kasinungalingan ang sinasabi nila. (They should return to the government. They should stop believing the communists because what they are saying are all lies.),” he said. 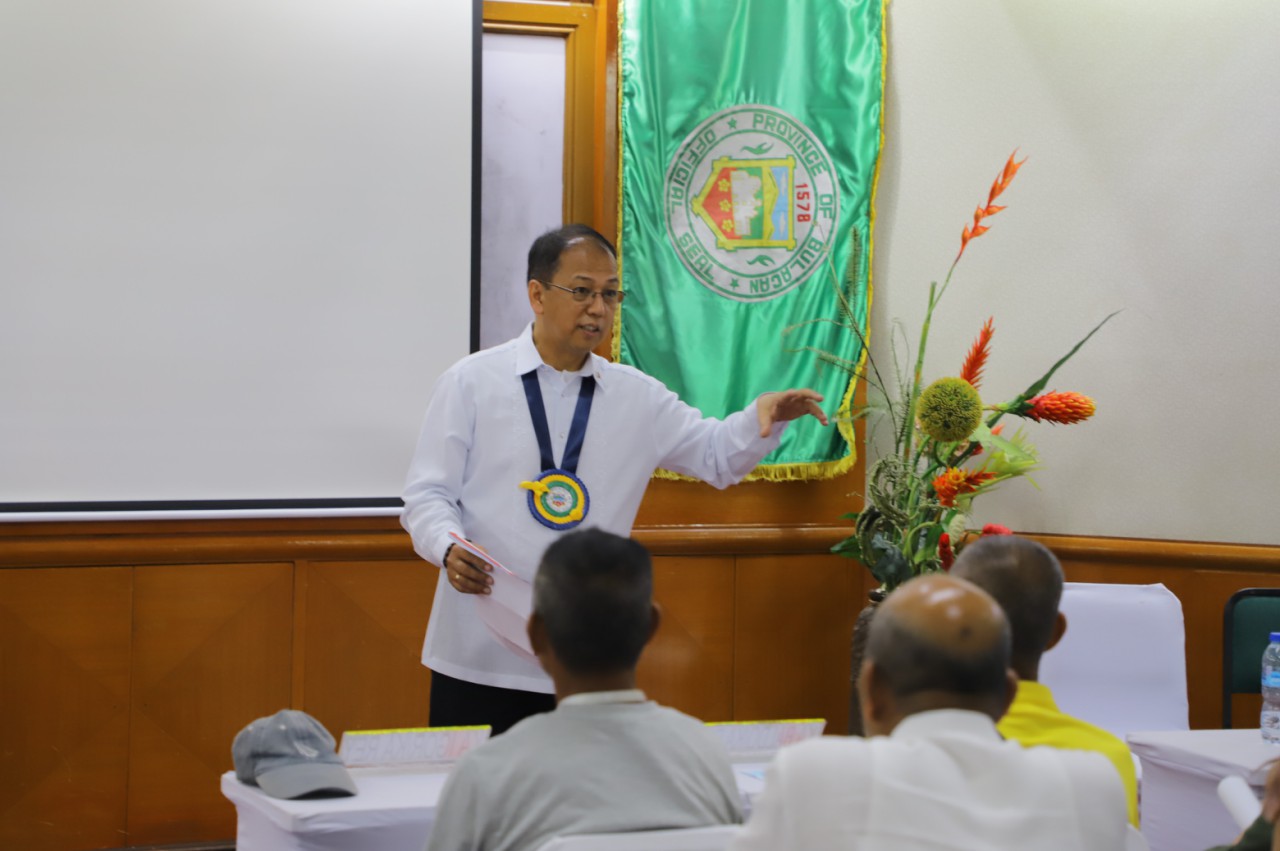 According to Galvez, among the key areas the government is focusing on in the fight against the communist insurgency in Region 3 is preventing the recruitment of cadres, particularly among the youth sector.

Among the returnees is Jane (Not her real name) who was recruited at age 15 by the urban poor organization Kalipunan ng Damayang Mahihirap or Kadamay.

“Ang sabi po sa amin, may libre pong pabahay, wala daw po kaming babayaran (We were told that there would be free housing, that we would not pay a cent, Jane said.),” Jane narrated.

Shortly after joining the group, she and her fellow recruits were assigned in hinterland communities.

This didn’t come as a surprise, as she demonstrated leadership qualities which enabled her to rise from the ranks as a youth organizer for Anakbayan, a left-leaning group.

Jane believed she was serving her countrymen when she joined the NPA. But when their leader prevented her from returning to the city, she knew that something wasn’t right.

“Pag bumaba daw po kami, totorturin at papatayin daw po kami ng militar. ‘Yun po ang sabi nila (If we go down to the city, we will be tortured and killed by the military. That’s what they [our commanders] said.),” she said.

Jane, who is now 18, also shared her ordeals when she was up in the mountains.

(It’s difficult to eat, we are tired, burdened, we carry our bags filled with rice grains; in our bags, 40 kilos of rice is the heaviest. That’s aside from our guns. That’s how difficult it is there, plus the trails that we cross are all vertical. We would just cling on to the grass. Downwards, there would be rocks and bamboo.)

By the time she became pregnant and gave birth to a baby boy, she decided that her son, who is now two months old, will not suffer the same fate.

Now free from the clutches of the NPA, she has a message for those who are planning to join the rebel group.

At least four governors and five mayors of Central Luzon, along with top officials of the region signed a pledge of commitment that will leverage government resources “to defeat a scourge that is instilling fear, mistrust and hate among our people.”

“As local chief executives, members of national, regional and provincial agencies, we shall take the lead in creating a conducive environment where long-lasting peace and sustainable development can flourish,” Galvez stressed.

The council also approved the implementation plans (IMPLANs) of the 10 clusters, which were formulated during the two-day convergence workshop in Pampanga last September. 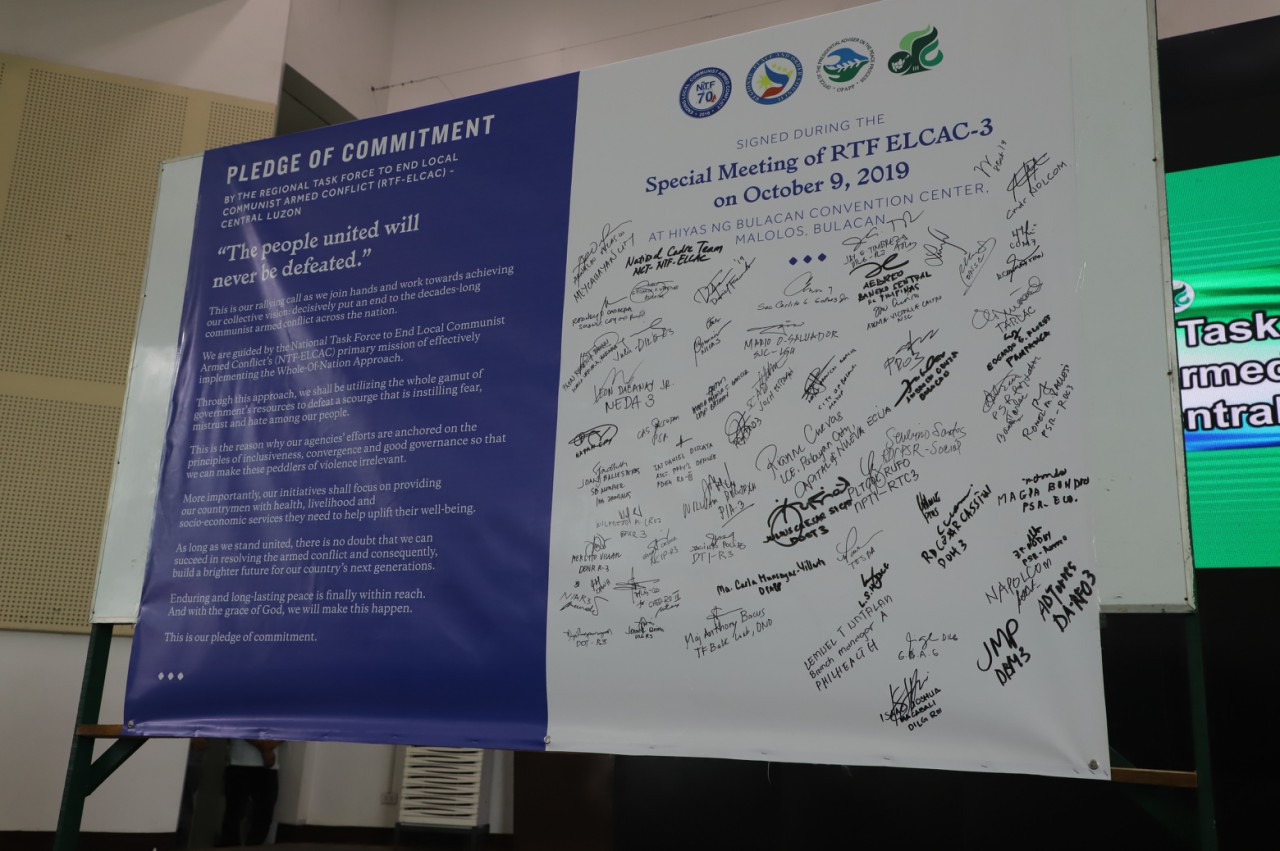 The cluster IMPLANs detail the programs and activities that will be undertaken in support of EO 70, or the Whole-of-Nation Approach in ending local communist armed conflict.

Bulacan Governor Fernando noted that the IMPLAN contain key measures that aim to  put an end to the communist insurgency in their areas. 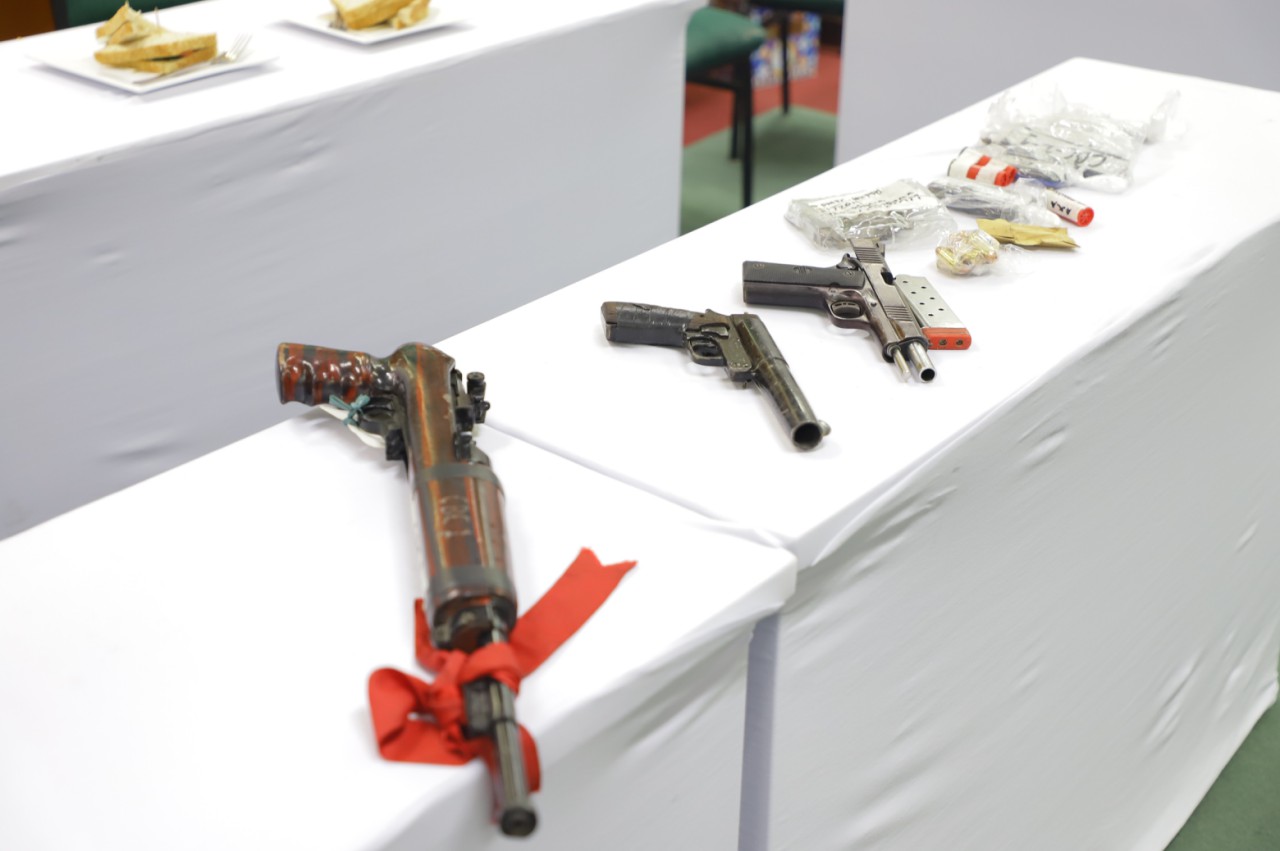 Firearms and other weapons taken from rebel returnees.