DATU ODIN SINSUAT, MAGUINDANAO, June 18, 2019 – More than 100 youth leaders from the Bangsamoro Autonomous Region in Muslim Mindanao (BARMM) converged here over the weekend and crafted a five-point youth peace and security agenda to ensure that their interests are well-reflected in the policies of the Bangsamoro Transition Authority (BTA),  as well as incorporated into the National Action Plan on Youth, Peace and Security.

In a Youth Peace and Security (YPS) Consultation organized by the Office of the Presidential Adviser on the Peace Process (OPAPP), BARMM youth leaders were given an avenue to discuss key concerns and submit recommendations to promote the youth sector’s agenda relative to the ongoing transition of the Bangsamoro interim government and the implementation of the Bangsamoro Organic Law (BOL).

Hamida Paglas, a participant and a member of MyPeace Boses ng Kabataan, said through this activity, the various narratives on the youth will be highlighted. 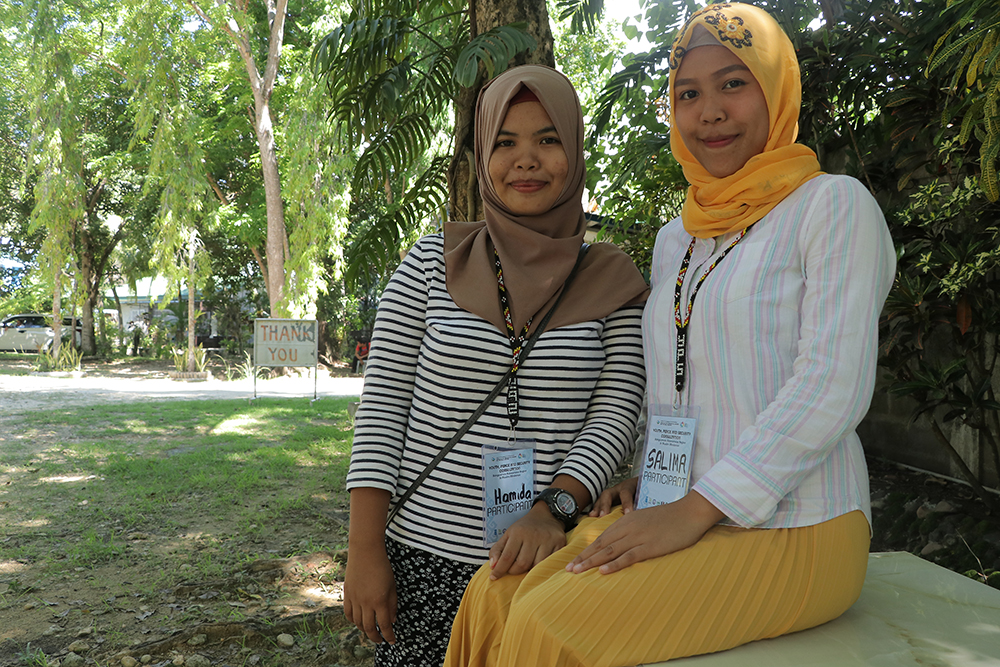 (Negative narratives about the youth will end. Our voices are heard, and our opinions and beliefs are acknowledged.)

Nasserudin Dunding, a representative of the Youth Political Reform and Peacebuilding Advocate of Young Centrists Union during the activity, noted the workshop is a chance for the BARMM youth to voice out their needs, saying, “Malaki ‘yong magiging tulong nito lalong lalo na sa mga kabataan. (The output for the YPS consultation is a big help for the youth).”

(We get to know the concerns and needs of the youth in the Bangsamoro straight from them, not from the theories we just hear.)

Under the BOL, there is one reserved sectoral seat for the youth sector in the Bangsamoro Parliament. The rights of the youth is also enshrined in Article IX: Basic Rights of the BOL, which specifically recognizes the vital role of the youth in nation-building. 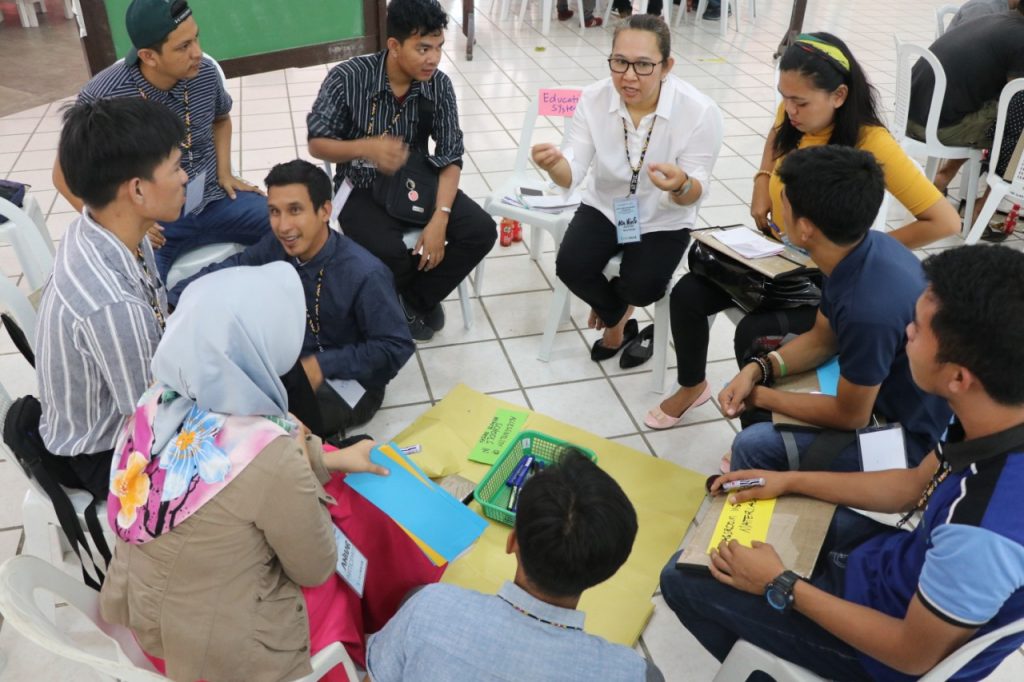 The passage and ratification of the BOL and the subsequent establishment of the BARMM is part of the political track of the Comprehensive Agreement on the Bangsamoro (CAB).

The consultation-workshop sessions focused on the role of the youth in governance and their representation in institutions; the promotion and protection of human rights; youth’s participation in the implementation of transitional justice and reconciliation initiatives; prevention of violence, promotion of a culture of peace; and rehabilitation and development efforts that address the needs of the youth affected by armed conflict.

From these main concerns, the participants proposed five immediate action points: (1) Empowering the youth through capacity building and in partnership with different stakeholders; (2) Proper research, documentation, validation of data narratives of the Bangsamoro and integration the same in the basic to tertiary education; (3) Strengthening social enterprise for the youth by the BARMM; (4) Policies and mechanisms in peace education should prioritize culture, religion, faith and formal institutions; and (5) Establish a BARMM youth grievance office that will support youth initiatives for rebuilding Marawi.

Among the participants is Arham Kamensa, a member of the Bangsamoro Youth Model Parliament (BYMP). BYMP is an OPAPP-led activity which simulates the Bangsamoro Parliament. The BYMP was launched during the celebration of National Peace Consciousness in 2018.

Kamensa said he looks forward “to the intervention of the Bangsamoro youth not just on political empowerment but also in education and business investments.”

“[These activities] will open eventual employment opportunities [in] major areas that have been directly affected by the [peace and security situation] in Muslim Mindanao throughout the years…I think, then, that platforms for these areas must be given [to] young Bangsamoro,” he added.

In his message which was delivered by OPAPP Director Jana Gallardo, Presidential Peace Adviser Carlito G. Galvez Jr. lauded the youth’s active participation as he stressed the importance of having their voices heard. 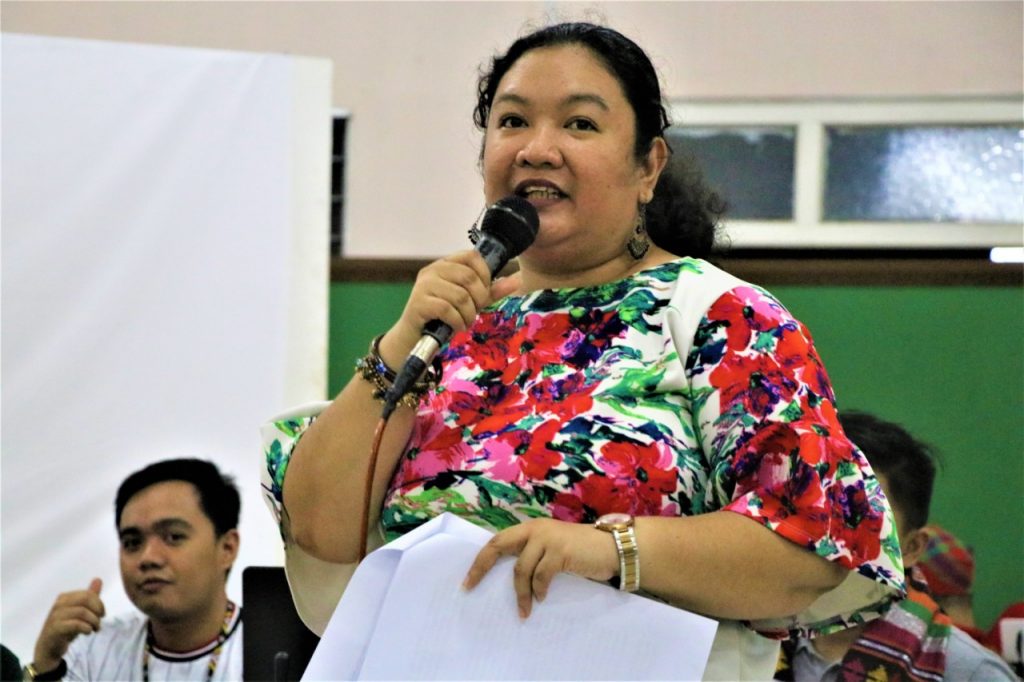 “I’d like to guarantee that we hear you, loud and clear. It is imperative that the inputs, concerns and insights that you have crafted will be reflected in the policies and actions,” he said.

The secretary also reaffirmed the national government’s commitment to support the BARMM youth in pushing forward their initiatives.

(We are here for you because we trust and believe in the potential of the youth in the Bangsamoro.) 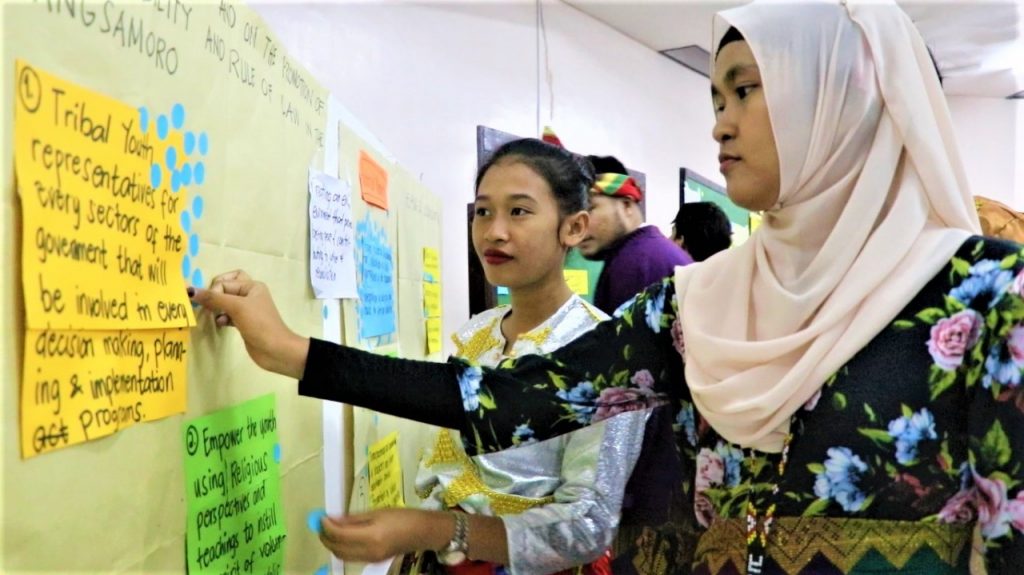 Galvez  also emphasized that the participation of the youth is crucial in sustaining peace in BARMM, as he said

(The power is in your hands to sustain the peace gains we have achieved here in the Bangsamoro.)

BTA Member of Parliament (MP) Atty. Anna Basman underscored the importance of establishing a mechanism that would guide the youth in resolving peace and security challenges in their community. 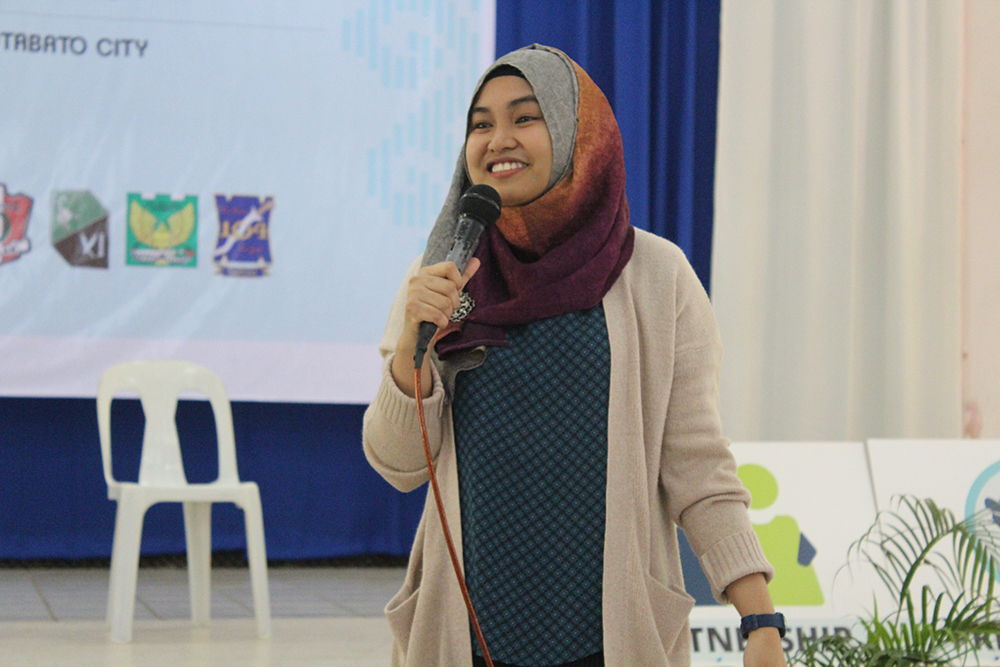 “The youth’s idealism is both a boon and a bane to the issue of peace and security. This laudable character makes some vulnerable to ideologies that purport to represent their belief system or their desire to advocate for the oppressed.

“Because of this, it has become crucial to provide a mechanism so that this same idealism is channeled to resolve emerging peace and security challenges in our communities,” she said.

Meanwhile, BTA MP and Executive Director of the Office on Bangsamoro Youth Affairs (OBYA) Marjanie Macasalong committed to that the output of the youth leaders will be incorporated in the local policies: 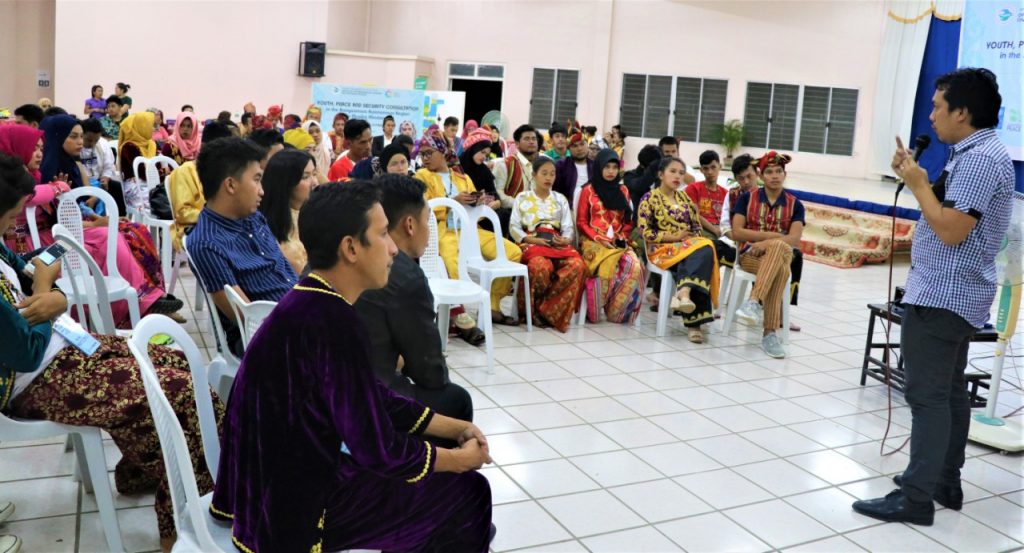 “…we commit to include these outputs to our Comprehensive Bangsamoro Youth Development Agenda which the OBYA is currently drafting. Rest assured that we, in our office, will do our best to address those issues within our bounds,” Macasalong said.

The activity also allowed the youth delegates to formulate and submit recommendations that would be incorporated into the youth peace agenda, which in turn, will be included in the crafting of a national action plan adopting the United Nations Security Council Resolution (UNSCR) 2250 on Youth, Peace and Security. 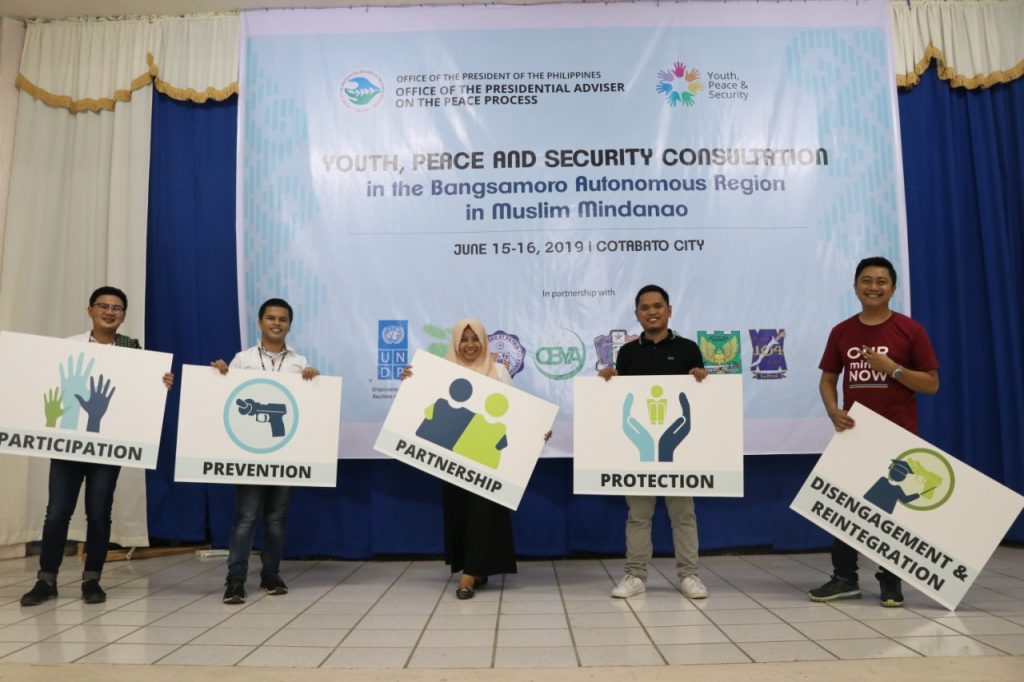 This is the first resolution to acknowledge the legitimacy of the youth’s role in upholding and promoting international peace and security.

In response to the UNSCR resolution and the government’s all-inclusive peace and development agenda, OPAPP initiated three major island-wide Youth Peace Table (YPT) consultations which became a platform for the youth to support the Bangsamoro and CPP/NPA/NDF Peace Processes, as well help in the promotion of the culture of peace.

After gathering 117 key youth leaders from across the country, the YPT was able to help establish 76 youth networks. The YPT has launched its Youth Peace Agenda, as well as implemented various peacebuilding initiatives in their schools and communities.