PASIG CITY, October 4, 2018 – Women peace practitioners from various Member States of the Association of Southeast Asian Nations (ASEAN) will be tapped to assist in the peace process and reconciliation efforts in the Philippines.

The project, dubbed “Symposium on the Establishment of an ASEAN Women for Peace Register (AWPR),” will develop a pool of experts from ASEAN Member States to be resource persons in assisting conflict management and conflict resolution activities.

Set to be conducted in December 2018, the symposium aims to gather nominated women experts who will share their knowledge and experiences in gender mainstreaming, capacity building, women’s achievements, and the promotion of respect for human dignity and human rights under the context of peace, reconciliation and conflict resolution.

It will also discuss the issues taken from the Joint Statement on Promoting Women, Peace and Security in ASEAN that was adopted last year during the 31st ASEAN Summit.

The Memorandum of Agreement (MOA) solidifying the project implementation was signed today in this city.

Office of the Presidential Adviser on the Peace Process (OPAPP) Secretary Jesus Dureza said he recognizes that women are not just victims of conflict but can also be active agents for peacebuilding and reconciliation.

“Kailangan talaga natin ‘to (We really need this MOA) to institutionalize women participation,” he said.

Dureza also thanked ASEAN-Institute for Peace and Reconciliation (ASEAN-IPR) and Ateneo de Manila University (ADMU) for their efforts in making the project a reality. 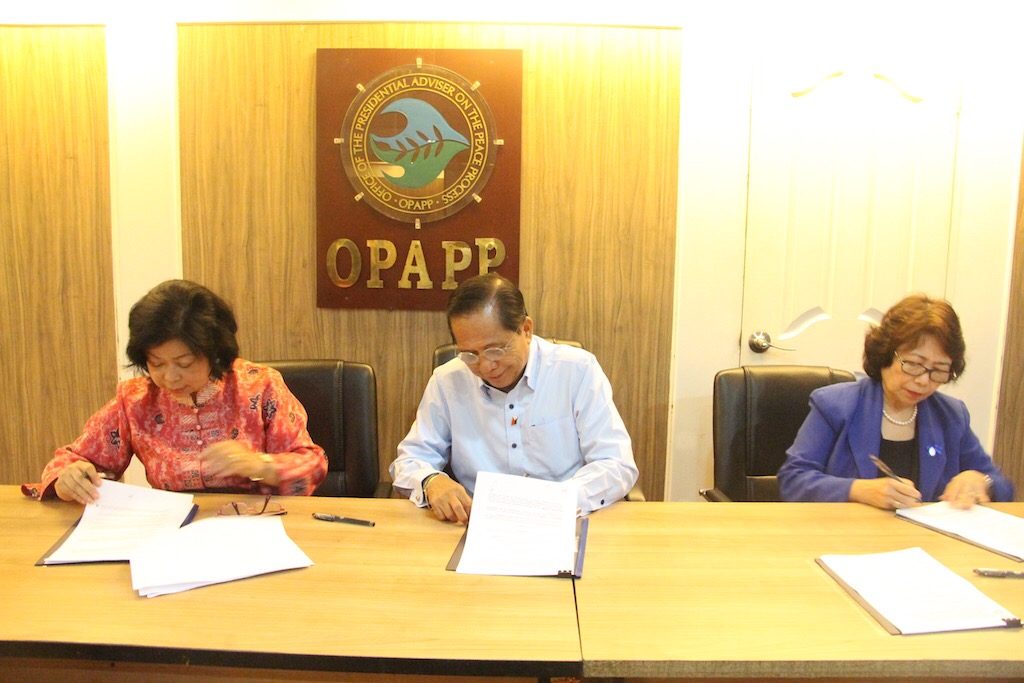 “We (OPAPP) will only be there to monitor and provide support if needed, but the ball will be in your court so salamat,” he said.

For its part, ADMU assured OPAPP and ASEAN-IPR of its commitment in delivering the symposium project as the implementing partner.

“You can trust us on our cooperation and ability to deliver, and we can assure you that what we represent here will be run very well,” ADMU Vice President for Loyola Schools Dr. Maria Luz Vilches said.

The Permanent Mission of the Philippines to ASEAN is the lead proponent of the project, with an oversight function together with the OPAPP.

The MOA was signed by Dureza, Vilches, and Permanent Representative of the Republic of the Philippines to ASEAN and Representative to ASEAN-IPR Governing Council Elizabeth Buensuceso. ###