DAVAO CITY (October 1, 2018) — For 15 young members of the Ata Manobo tribe, the culmination program of National Peace Consciousness Month on September 28 was both a day of celebration and of mourning.

With Davao City hosting the event, the scholars of the national government’s Payapa at Masaganang Pamayanan (PAMANA) Program being implemented by the Office of the Presidential Adviser on the Peace Process (OPAPP) came down from the hinterlands of Talaingod, Davao del Norte to tell their story.

Garbed in traditional dress, they stood teary-eyed onstage at the Rizal Park as they sang in their native language their gratitude to the national government for the assistance it had given them.

They also paid tribute to a fallen comrade, the 16th scholar who was abducted and killed by unidentified assailants after delivering rice to a military camp.

According to friends and relatives, he was a responsible, hard-working lad who dreamed of giving his family a better life. 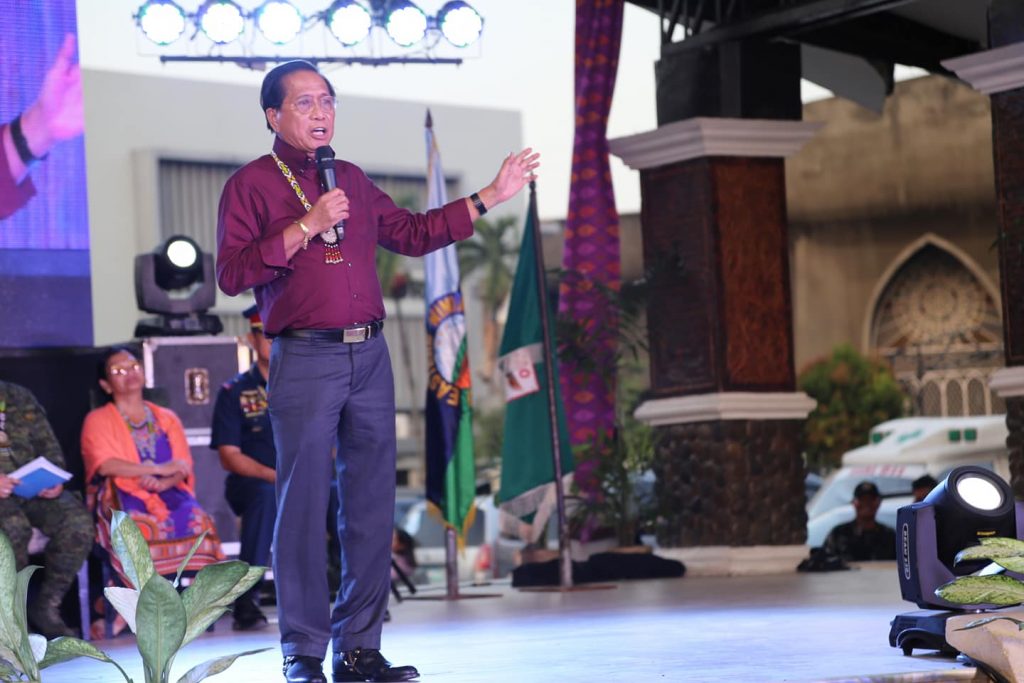 Presidential Peace Adviser Jesus Dureza was highly emotional while narrating the unfortunate incident to more than 600 people attending the event.

“(This was) done by a group that has no objective but to sow fear and terror in the hearts (of people),” Dureza said.

“It shows the extent of what those who want to create trouble would go just to make their point clear,” he added.

Dureza, however, said the passing of the young man should not dishearten people but instead serve as an inspiration to all.

This was exactly what the 15 remaining PAMANA scholars did: despite the painful loss of their friend, they still proceeded with their trip to Davao City to participate in the Peace Month celebration.

“They did not surrender their ground. They are examples of what every citizen should do,” Dureza said.

Dureza said the task of addressing the various peace and security challenges confronting the nation should not be the sole responsibility of government.

“We in government can’t do this alone. We can provide the leadership, we can create a convergence of efforts, but ultimately, the people out there will have to do it,” he said.

In order to bring about this synergy of efforts among stakeholders, Dureza said he seeks guidance from no less than President Duterte who named him Presidential Peace Adviser more than two years ago.

“President Duterte’s first marching order to us at OPAPP when he assumed office was for us to do a peace and development roadmap,” he said.

Dureza said the roadmap would serve as the “nexus” of the Duterte administration’s Peace and Development Agenda.

He noted that the work for peace should not be confined to peace negotiations with the various rebel groups and addressing security issues, saying that is “only half of the job.”

“The other, bigger, more important part is development. We cannot sustain peace if we don’t have development that will improve the lives of people,” Dureza said.

“Conversely, we cannot sustain development even if we provide a lot of assistance. If there is conflict, nothing will happen,” he added.

Dureza emphasized that peace and development “must happen simultaneously” and not take place one after the other.

Moreover, he said the government must not only focus on the signing of peace agreements but, more importantly, look at the triggers of conflict.

“Let us analyze. Why are there a lot of people rebelling against government? Some of them… their children don’t go to school… they are poor. They feel they are looked upon as enemies,” Dureza said.

He noted that most of those who are engaged in armed struggle are not motivated by ideology but by their current economic conditions.

“They feel that their needs are not being attended to, that they have been forgotten,” Dureza said.

He said this is the rationale behind the whole-of-government approach wherein all national government agencies are closely working with each other to provide socio-economic services particularly to residents in remote and underdeveloped areas.

“The whole-of-nation approach of government is that…they (agencies) are all converging together,” Dureza said.

“We have to work together to have sustainable peace and development,” he added. ###