MADRID, SPAIN – OPAPP Executive Director Undersecretary Diosita Andot conveyed the Philippine Government’s sincerest gratitude to the Spanish Cooperation Agency for International Development (AECID) for its sustained efforts and commitment in support of the Philippine peace process in a meeting on April 25 at the Headquarters of AECID here in the city. 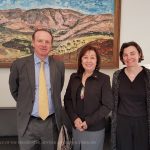 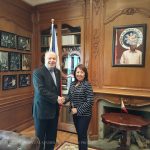 Courtesy visit of Usec. Diosita Andot to the Philippine Ambassador to the Kingdom of Spain, H.E. Philippe J. Lhuillier on April 26.

Present in the meeting were Mr. Luis Tejada Chachon, the Director of AECID, and Ms. Cristina Diaz Fernandez-Gil, the Director General for Africa and Asia, where AECID emphasized its commitment to support the Philippine Government’s strategy for Mindanao peace and development through any mechanism that may be agreed upon and set later.

Undersecretary Andot’s meeting with the executives of AECID is part of her four-day official visit to Spain, where the she is expected to speak at the Opening Plenary and participate in the two-day event of the “1st Annual Meeting of the Women, Peace and Security Focal Points Network” on April 26-27 in Alicante, Spain.

She is also expected to have a bilateral meeting with Spain’s Secretary of State for Foreign Affairs, Mr. Ildefonso Castro, on April 26.

Upon arrival in Spain, Undersecretary Andot made a courtesy visit to the recently installed Philippine Ambassador to the Kingdom of Spain, H.E. Philippe J. Lhuillier, and Consul and First Secretary Mary Luck Hiriarte at the Philippine embassy in Madrid.

Both the technical and financial support for this activity have been extended by the AECID in the Philippines.