Release of Political Prisoners as a Necessary Step to Achieve Peace

A week ago, 66 year-old Bernabe Ocasia became the 13th political prisoner to die in detention in the last five years, and the first under the administration of President Rodrigo R. Duterte. Ocasia had been in prison for over a decade before he suffered a massive stroke that led to his death. It is the fervent wish of many advocates and families of political prisoners pushing for the freedom of their loved ones that Ocasia will be the last political prisoner to suffer death without seeing the hands of justice turn.

This wish may just be fulfilled anytime soon with the promise of President Duterte to release all political prisoners through a general amnesty. In early October, the Office of the Presidential Adviser on the Peace Process submitted to the President a draft amnesty proclamation covering a total of 434 political prisoners. Of the 434 political prisoners, 83 are in different detention facilities in Southern Mindanao Region. 14 of them are sickly, 4 are women including Amy Pond, a resident of Davao City and a teacher in a lumad school, who recently underwent lumbar spine surgery. Some have been detained for almost two decades.

The list was drafted based on the same list submitted to OPAPP by NDF Chief Negotiator Agcaoili. No less than our own former city councilor, now government negotiator Angela Librado-Trinidad announced the submission of the list to the Office of the Executive Secretary in a media interview last October 9, 2016.

Of the 434 political prisoners listed in the submitted paper for amnesty proclamation, the government has already released 22 consultants of the NDF including the couple Wilma and Benito Tiamzon. Their release was a goodwill gesture on the part of the government of its sincerity to pursue the peace negotiations that has been derailed for a long time. The release of the 22 political prisoners was a necessary step to break through the long lull and hold the first round of peace negotiations three months ago.

The NDF expects ore releases of prisoners even as they demanded to have all political prisoners release as a necessary incentive for them to agree to a bilateral ceasefire agreement. Thankfully, the ceasefire is still holding up, allowing the government and the NDF to establish common rules for its troops to avoid violent misencounter.

Freeing all political prisoners is a critical component of the continuation and conclusion of peace talks which our President is so passionately advocating for. However, the Congress – both the Senate and the House of Representatives, need to approve the general amnesty proclamation before the government can take any step in freeing all detainees listed by the NDF as their member. We are thus calling on the Congress to support this necessary step to peace and allow the President to make true his promise to release all political prisoners. It is good to know that at least 50 political prisoners will be set free soon with the recent announcement by the OPAPP to release them on humanitarian grounds. Their release is expected to be made anytime even as the government prepares for the third round of peace talks with the NDF, come January 2017. The 50 PP’s are mostly women, elderly, sick and long-term detainees.

At the proper time, Mr. President, this representation will submit a resolution supporting all forms of initiative to free all political prisoners or through a general amnesty thus, urging both Houses of Congress for its concurrence as well as the expeditious and prompt review of the political prisoners’ cases and the disposition of their respective cases. 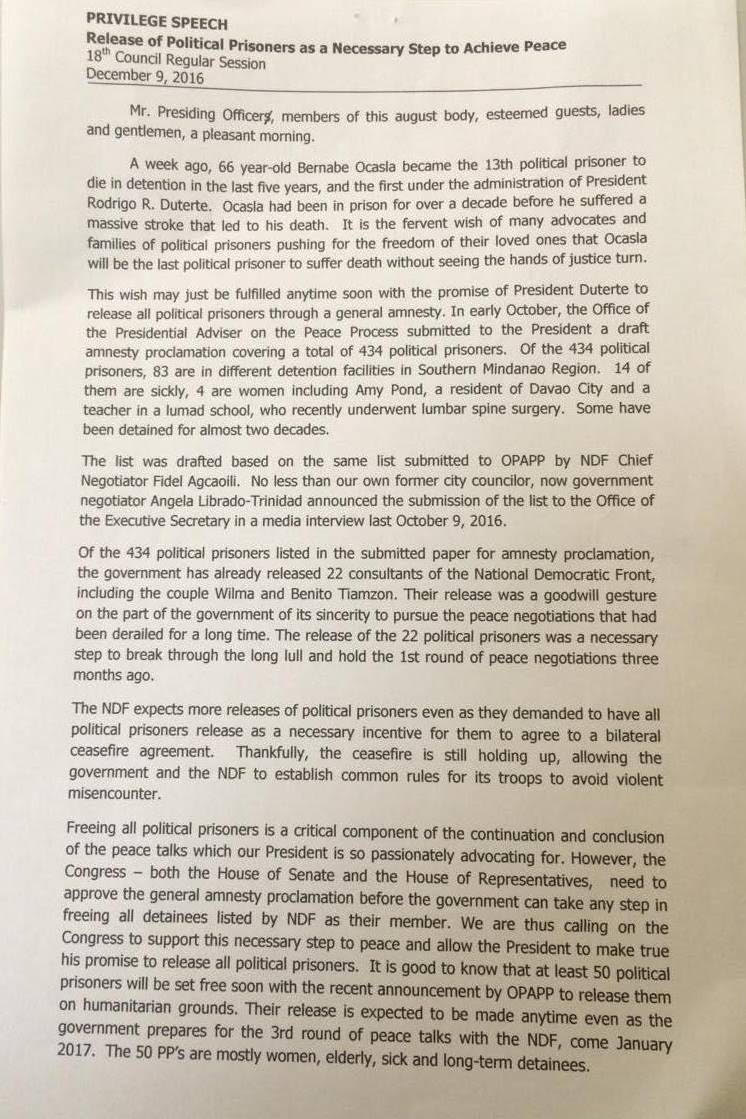 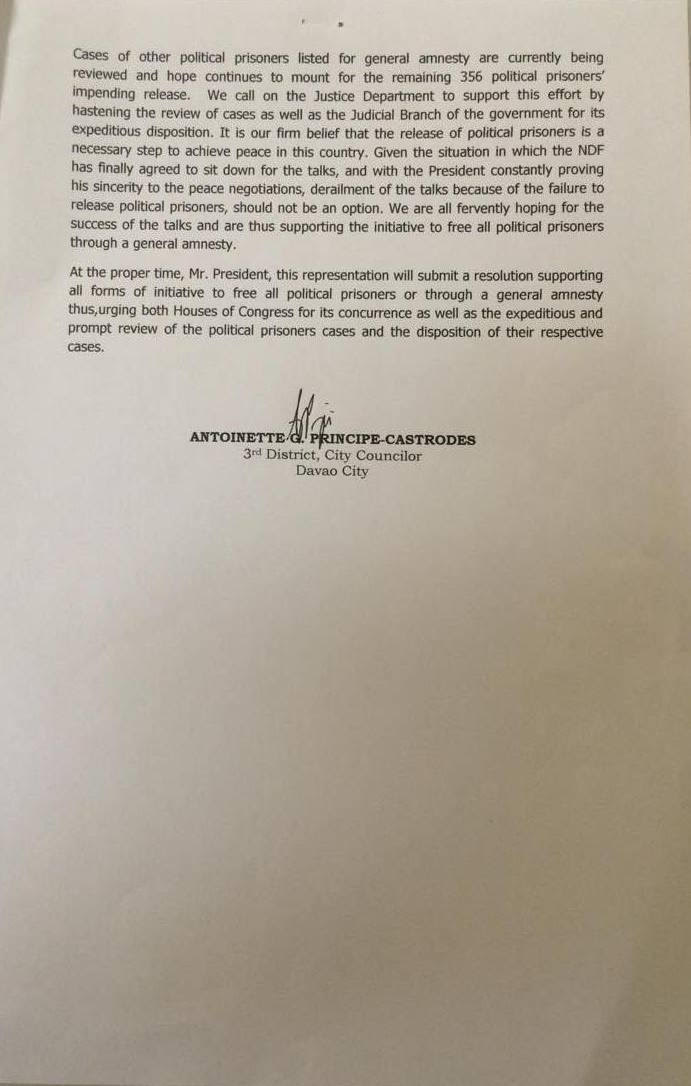 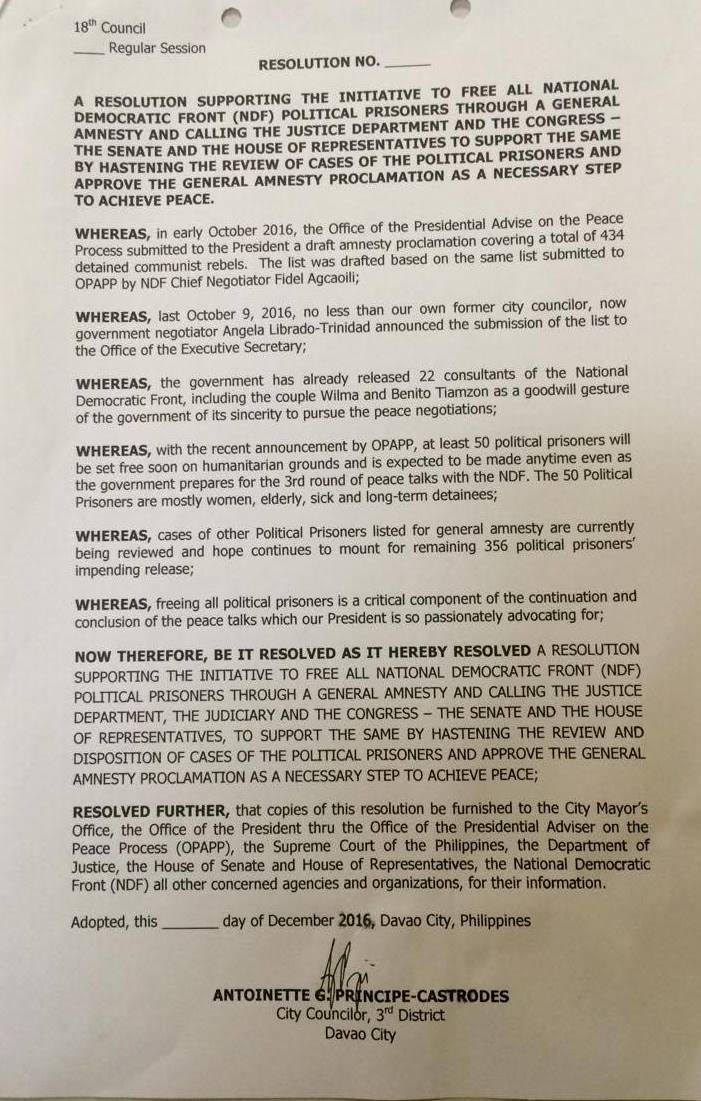 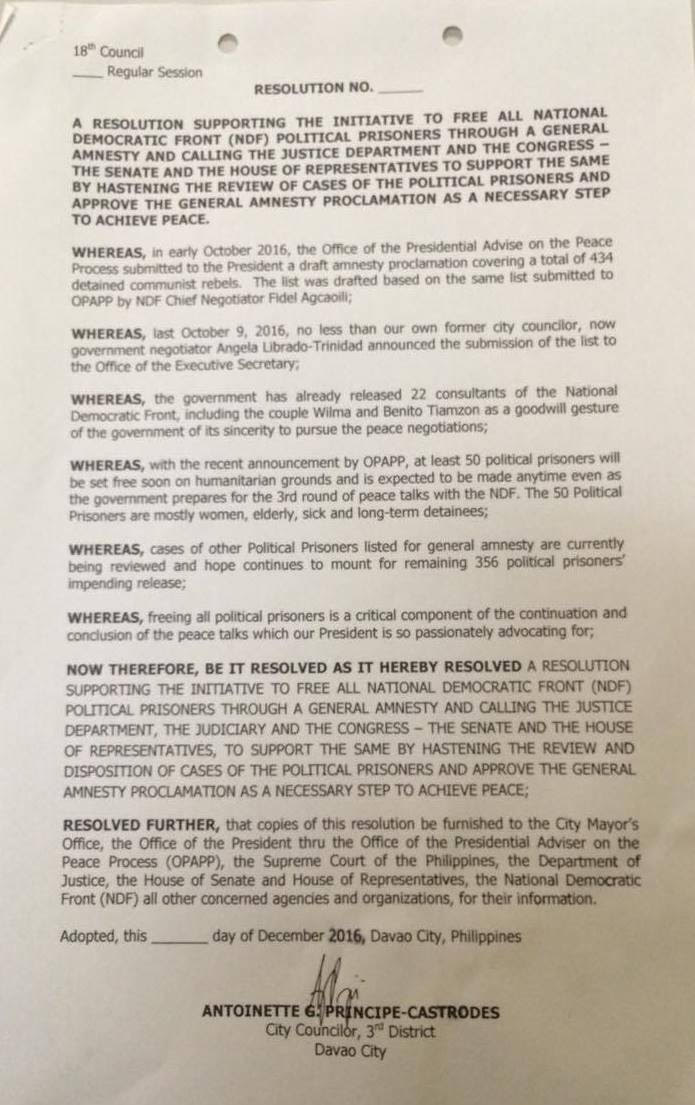