Storytelling, which predates writing, has long been used in early societies as their means of passing tradition and beliefs from one generation to the next. Transformed into powerful narratives, storytelling aids in the cohesion of people’s identity and culture. 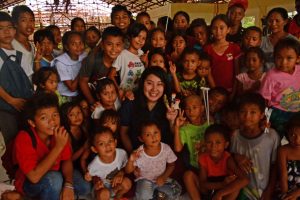 Viewed in this regard, stories then become more than just imaginative tales but rather a reflection of one’s place within the grander scheme of things. They become more than folklores and myths as they enable listeners to create their own narratives that are reflective of their personal values and experiences.

In conflict situations, stories enable societies to connect, engage, and even provide opportunities to resolve conflicts. They help in socializing — countering false stereotypes and narratives that justify violence and conflict thereby assisting the process of peacebuilding.

“Stories become more than folklores and myths as they enable listeners to create their own narratives that are reflective of their personal values and experiences.”

Noting the value and importance of Executive Order No 570 s. 2006, known as Institutionalizing Peace Education in Basic Education and Teacher Education, storytelling sessions were held across Payapa at Masaganang Pamayanan (PAMANA) areas during the 2016 National Peace Consciousness Month. 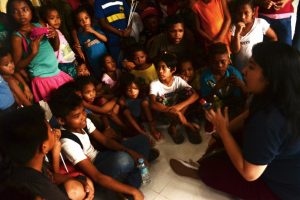 More than to support and promote a culture of peace in the education system, the rationale behind the storytelling sessions in conflict-affected and underdeveloped areas was to provide its people, especially the young generation, the spark to help change their situation.

The Office of the Presidential Adviser on the Peace Process (OPAPP) also serves as the Chair and Secretariat for the Executive Committee of Executive Order 570.

One such session conducted was during the Serbisyo Peace Caravan, gathering a hundred Indigenous People (IP) students from the communities of Kitcharao and Santiago, Agusan del Norte. A rather new method employed in peacebuilding, storytelling is seen as an effective tool in raising awareness on resolving conflicts in nonviolent means.

The story entitled “Pocahontas” was presented to around 100 indigenous people students. Considering the limitation of the students in understanding the English language, the story was translated in Cebuano.

Finger puppets were also used in the conduct of the storytelling to help capture and hold the attention of the students. 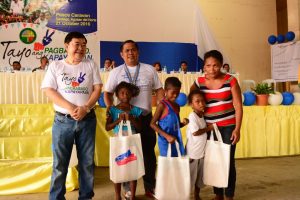 “Storytelling is seen as an effective tool in raising awareness on resolving conflicts in nonviolent means.”

The Peace Caravan, as part of the Payapa at Masaganang Pamayanan initiative of the OPAPP, aims to extend government services and development interventions, including basic health care and livelihood projects, to communities in conflict-affected areas. ###