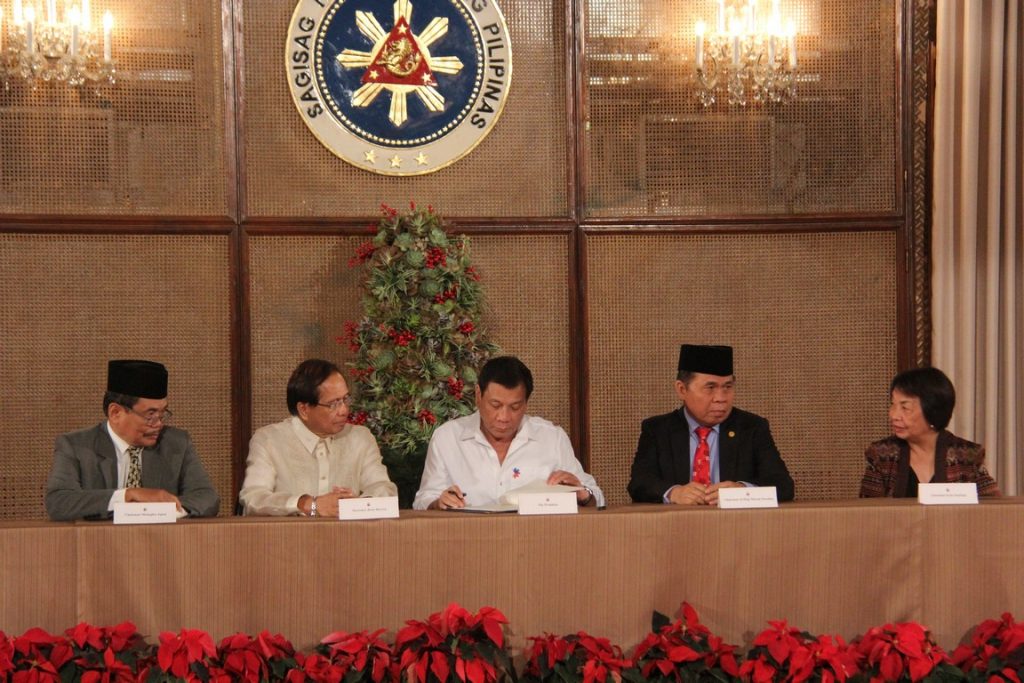 MANILA – President Rodrigo R. Duterte has signed Executive Order No. 8 on 7 November that will create a new and expanded Bangsamoro Transition Commission (BTC) that will strive to bring together all key peace actors and stakeholders in the implementation of all Bangsamoro accords.

“We are looking at a more inclusive approach in the Bangsamoro peace process and we are going to work with all factions and all groups in the Bangsamoro as we work towards the completion of that new enabling law,” Office of the Presidential Adviser on the Peace Process (OPAPP) Secretary Jesus G. Dureza said during the signing ceremony held in Malacañang.

The original BTC did come up with a draft law called the Bangsamoro Basic Law. The draft legislation underwent several revisions in both the Senate and the House of Representatives. However, the bill ultimately did not pass due to a confluence of factors chief of which are the Mamasapano incident and the apparent lack of consultation with key stakeholders.

“The signing of the new executive order is a very significant occasion because it will signal the restart of what had slowed down because of the failure of our previous Congress to enact the enabling law,” Dureza emphasized.

The BTC has also been given additional mandate to convene an inclusive Bangsamoro Assembly as a consultative body to discuss the enabling law with various stakeholders.

Dureza referred to this assembly as the “other peace tables that will be established hereon that can give inputs for the BTC and can help to address other concerns”.

“There will be different tables to be consulted on the works of the BTC. We will meet with these different groups because we cannot accommodate all of them and give them representations in the BTC,” Dureza explained.

“In our common struggle to pursue the Bangsamoro right on self-determination, let us set aside our selfish interests – parochial, tribal and other interests – and make it paramount the collective interests of the Bangsamoro who just demand correction of the historical injustices and identity,” Iqbal pointed out.

MNLF participation in the BTC

Dureza disclosed that representatives of the Moro National Liberation Front (MNLF) will be part of the expanded BTC. “We will have MNLF headed by Muslimin Sema. They have three seats in the BTC on the side of the government.”

The faction of founding chairman Nur Misuari, according to the peace adviser, opted not to participate in the BTC due to their “principled position”.

“Chairman Nur Misuari has principled position since the BTC is a mechanism of the CAB. Of course, you should understand that Chairman Nur Misuari make reference to government and MNLF’s 1996 Final Peace Agreement. He has not yet abandon that agreement,” Dureza explained.

Aside from drafting an enabling law, the EO also mandates the BTC to recommend amendments to the 1987 Philippine Constitution.

The roadmap of the Duterte administration for the Bangsamoro encompasses two simultaneous tracks – the legislative track for the new enabling law and the federalism track through constitutional changes to shift the current unitary system to a federal set-up.

“The federal state for the Bangsamoro will actually form part with other federal states of other areas to compose one federal republic later on,” Dureza concluded.

About the Author: George Michael Oribiana

George Michael D. Oribiana is a writer at the Communications Group of the Office of the Presidential Adviser on the Peace Process. He previously worked as content producer in a peace and development organization and a broadcast media entity. He is advocating peace promotion, heritage conservation, development of local movie industry, and ecotourism through blogging and photography.